How do Leeches Work? 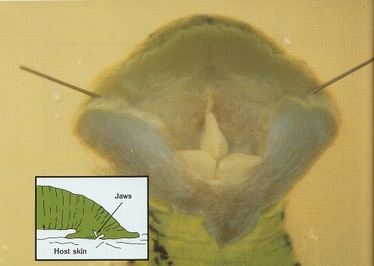 Leeches offer a safe and effective way of relieving locally congested blood, particularly in delicate areas.  Uniquely the leech has three jaws which are perfectly designed for sucking blood.  Each jaw has approximately 100 teeth meaning that a leech bite consists of roughly 300 teeth.

Thankfully it is in fact pretty painless thanks to the anaesthetic which the leech releases into the wound when it bites.  A major advantage of the tripartite arrangement of the jaws is that the leech bite produces a neat cut (resembling the Mercedes Benz emblem) that directly exposes the patient's underlying blood vessels.

Leeches are effective not simply when they are attached, but most significantly long after they have finished feeding and dropped off.  Not only does the leech help to decongest blood as it feeds, but it also promotes continual decongestion in the hours following the application.

The leech injects several compounds into the wound whilst it feeds, and it is these which ensure that the wound continues to bleed steadily for up to 10 hours.  The leech first injects the compound known as hirudin, this is a powerful anti-thrombin and maintains blood flow as the leech feeds, and immediately after the leech has finished feeding.

Whilst the leech feeds it also injects a further compund known as calin and it is this which is responsible for the prolonged bleeding in the proceeding hours.  Calin binds to collagen and subsequently neutralizes collagen's capacity to induce blood clotting.  This prolonged bleeding is something unrivalled by any medical method; no other method can duplicate the effects of a leech bite.  It is this continual flow of blood that can give valuable time to a body part or appendage to re-establish its own circulation.